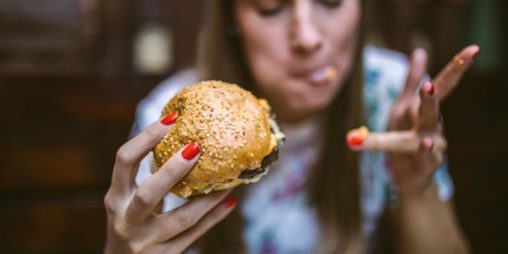 When was the last time you shook someone’s hand? For many of us, it’s been well over a year. Thankfully, the custom of shaking hands in America is so strong that it outlived a pandemic. So, kudos to the handshake, and welcome back! It’s been far too long. Last year, we set aside so many of our customs and annual traditions until further notice. Finally, “further notice” is here, and one of our favorite yearly Corinth traditions is back this week — the 34th annual Slugburger Festival.

Are you asking yourself, “What’s a slugburger?” or  “Why are you talking about snail food?” Don’t worry. The point we’re getting to makes some sense. And no snails were harmed in the making of this sandwich. Atlas Obscura offers some helpful background information on the resourcefulness behind the creation of this traditional, yet unique, southern dish:

To cope with the scarcity of affordable beef during the Depression, burger flippers in Mississippi, Alabama, and Tennessee employed the handy practice of “meat extending.” Rather than toss a mound of pure ground beef or pork on the grill, cooks cut their patties with potato flour. The result was a surprisingly satisfying burger that was crunchy on the outside and soft on the inside. Purveyors of the slugburger slung it for five cents, also referred to as a “slug.” The trick helped the animal-protein supply go further and reduced prices for penny-pinching customers, which was almost everyone.

Like the slugburger, ACE was born out of Depression-Era ingenuity. During this time, America met a multitude of challenges with creativity and resourcefulness. ACE founders knew that access to electricity was essential for rural Americans in these times. We had to think outside of our immediately visible parameters, much like the creator of the slugburger, John Weeks, did. According to What’s Cooking America, Weeks was inventive from the start. Before creating slugburgers, Weeks sold regular hamburgers from a moveable building that was six feet wide and twelve feet long. Constructed using two bicycle wheels, it only had enough room for one person to stand in it at a time.

Of course, ACE ultimately found ways to extend electric services without adding potatoes or putting any buildings on wheels. Though, it still required some innovative thinking from several Corinth community leaders, including Ben Liddon, a Corinth banker, and Dolphus “Dee” Crow, a farmer. They wanted to help their local economy by bringing power to Alcorn County. At a time where money was as scarce as food and electricity, this was no easy task.

That didn’t stop Corinth from finding a solution. When the Tennessee Valley Authority started producing cheap hydroelectric power, Corinth seized the opportunity to work with them, thereby garnering community support and future government funding for their mission. The result was the Alcorn County Electric Power Association, America’s first rural cooperative, and it’s one reason why electricity is no longer an unattainable luxury in our country.

Innovation and hard work got us where we are today, and the same is true for slugburgers. Celebrate this weekend by knowing that you’re celebrating more than just a fried hamburger. The Slugburger Festival is so much more than that. It’s a celebration of resourcefulness, innovation, creativity, and tough skin — but not snail skin. With an amateur eating contest, a car show, a beauty pageant, and all the delicious slugburgers you can eat, you don’t want to miss a moment of this historic local tradition, and neither do we.